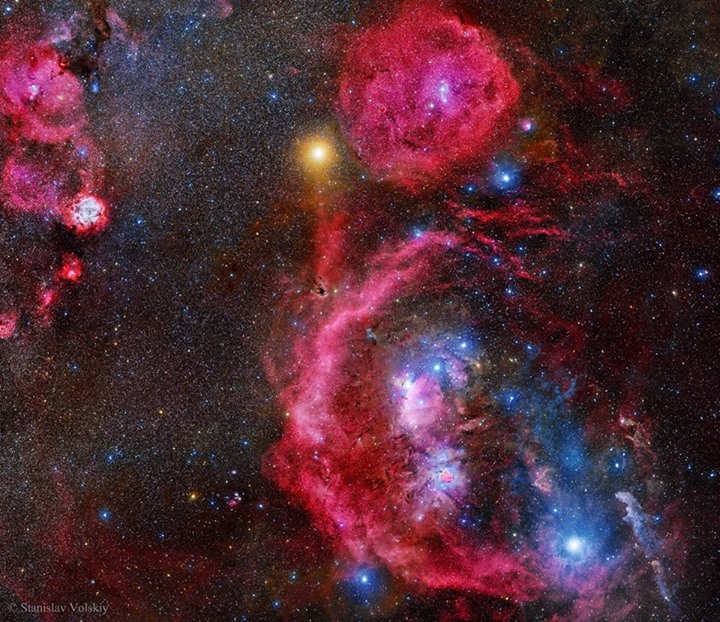 “For my part I know nothing with any certainty, but the sight of stars makes me dream.” – Vincent van Gogh

“A telescope is a machine that can change your life.” – Richard Berry

“Stargazing is that vehicle of the mind which enables us all to roam the universe in what is surely the next best thing to being there.” – William Dodson

“But let’s forget the astrophysics and simply enjoy the spectacle.” – Walter Scott Houston

“I became an astronomer not to learn the facts about the sky but to feel its majesty.” – David Levy

“I am because I observe.” – Thaddeus Banachiewicz

“Even if there were no practical application for the serene art of visual observing, it would always be a sublime way to spend a starry night.” – Lee Cain

“To me, astronomy means learning about the universe by looking at it.” – Daniel Weedman

“Astronomy is a typically monastic activity; it provides food for meditation and strengthens spirituality.” – Paul Couteau

“Astronomy has an almost mystical appeal. . . . We should do astronomy because it is beautiful and because it is fun.” – John Bahcall

“The great object of all knowledge is to enlarge and purify the soul, to fill the mind with noble contemplations, and to furnish a refined pleasure.” – Edward Everett

“The appeal of stargazing is both intellectual and aesthetic; it combines the thrill of exploration and discovery, the fun of sight-seeing, and the sheer joy of firsthand acquaintance with incredibly wonderful and beautiful things.” – Robert Burnham, Jr.

“Whatever happened to what amateur astronomers really care about – simply enjoying the beauty of the night sky?” – Mark Hladik

“I would rather freeze and fight off mosquitoes than play astronomy on a computer.” – Ben Funk

“Were I to write out one prescription to help alleviate at least some of the selfmade miseries of mankind, it would read like this: ‘One gentle dose of starlight to be taken each clear night just before retiring’.” – Leslie Peltier

“The high-tech devices pervading the market are ruining the spirit of the real meaning of recreational astronomy – feeling a close, personal encounter with the universe.” – Jorge Cerritos

“The sky belongs to all of us. It’s glorious and it’s free.” – Deborah Byrd

“We are needy, self-absorbed creatures whose fundamental instincts are for survival and propagation. Any time we can transcend the tyranny of our genes is precious, and the night sky is a portal to this transcendence.” – Peter Leschak

“To me, telescope viewing is primarily an aesthetic experience – a private journey in space and time.” – Terence Dickinson

“Observing all seems so natural, so real, so obvious. How could it possibly be any other way?” – Jerry Spevak

“As soon as I see a still, dark night developing, my hear starts pounding and I start thinking ‘Wow! Another night to get out and search the universe.’ The views are so incredibly fantastic!” – Jack Newton

“Take good care of it [your telescope] and it will never cease to offer you many hours of keen enjoyment, and a source of pleasure in the contemplation of the beauties of the firmament that will enrich and ennoble your life.” – William Tyler Olcott

“The amateur astronomer has access at all times to the original objects of his study; the masterworks of the heavens belong to him as much as to the great observatories of the world. And there is no privilege like that of being allowed to stand in the presence of the original.” – Robert Burnham, Jr.

“But it is to be hoped that some zealous lover of this great display of the glory of the Creator will carry out the author’s idea, and study the whole visible heavens from what might be termed a picturesque point of view.” – T.W. Webb

“But aren’t silent worship and contemplation the very essence of stargazing?” – David Levy

“Adrift in a cosmos whose shores he cannot even imagine, man spends his energies in fighting with his fellow man over issues which a single look through this telescope would show to be utterly inconsequential.” – Dedication of Palomar 200-inch Hale Telescope.

“How can a person ever forget the scene, the glory of a thousand stars in a thousand hues . . .?” – Walter Scott Houston

“Seeing through a telescope is 50 percent vision and 50 percent imagination.” – Chet Raymo

“A night under the stars . . . rewards the bug bites, the cloudy nights, the nextday fuzzies, and the thousand other frustrations with priceless moments of sublime beauty.” – Richard Berry

“All galaxies [and other celestial wonders!] deserve to be stared at for a full fifteen minutes.” – Michael Covington

“It is not accident that wherever we point the telescope we see beauty.” –R.M. Jones

“You have to really study the image you see in the eyepiece to get all the information coming to you. Taking a peek and looking for the next object is like reading just a few words in a great novel.” – George Atamian

“We as astronomers can always retreat from the turbulence around us to our sanctum sanctorum, the sky.” – Max Ehrlich

“The night sky remains the best vehicle of escape I know. Simply . . . staring up at a crystal clear sky takes the weight of the world off your shoulders.” – Victor Carrano

“What we need is a big telescope in every village and hamlet and some bloke there with that fire in his eyes who can show something of the glory the world sails in.” – Graham Loftus

“Someone in every town seems to me owes it to the town to keep one [a telescope!].” – Robert Frost

“The pleasures of amateur astronomy are deeply personal. The feeling of being alone in the universe on a starlit night, cruising on wings of polished glass, flitting in seconds from a point millions of miles away to one billions of light-years distant . . . is euphoric.” – Tom Lorenzin

“I’m a professional astronomer who deeply loves his subject, is continually in awe of the beauty of nature [and] like every astronomer I have ever met, I am evangelistic about my subject.” – Frank Bash

“Nobody sits out in the cold dome any more [at Palomar – and nearly all other professional observatories today!] – we’re getting further and further away from the sky all the time. You just sit in the control room and watch television monitors.” – Charles Kowal

“There is something communal and aesthetically rapturous about original archaic photons directly striking the rods and cones in my eyes through lenses and mirrors. . . . These same photons now impinging on my retina left ancient celestial sites millions of years ago.” – Randall Wehler

“Some amateur astronomers, it is said, experience the ‘rapture of the depths’ when observing the Andromeda galaxy.” – Sharon Renzulli

“We have enjoyed knowing the stars. We are among the thousands who have found them old friends, to which we can turn time after time for refreshing thoughts and relief from the worries and troubles of every-day life.” – Hubert Bernhard, Dorothy Bennett, and Hugh Rice

“How could I convey the mystical love I feel for the universe and my yearning to commune with it? Gazing into the beginning of everything, we are young once again. The child within us is set free.” – Ron Evans

“I believe that in looking out at the stars we meet deep psychological and spiritual needs.” – Fr. Otto Rushe Piechowski

“Spending a dark hour or two working through the starry deeps to catch faint, far trophies is remarkably steadying for the soul. The rest of the world falls away to an extent only realized upon reentering it, coming back with a head full of distant wonders that most people never imagine.” – Alan MacRobert

“The universe seems to demand that we stay in a state of continual astonishment.” – K.C. Cole

“. . . the spell with which Astronomy binds its devotees: the fascination and the wonder, not to be put into words, of the contemplation and the understanding of the heavens.” – G. de Vaucouleurs

“I can never look now at the Milky Way without wondering from which of those banked clouds of stars the emissaries are coming.” – Sir Arthur Clarke

“To turn from this increasingly artifi cial and strangely alien world is to escape from unreality. To return to the timeless world of the mountains, the sea, the forest, and the stars is to return to sanity and truth.” – Robert Burnham, Jr.

Somewhere, something incredible is waiting to be known. (Carl Sagan) View all posts by alancatovic